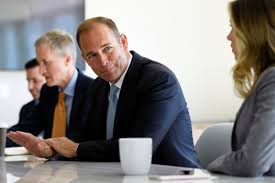 Former SandRidge Energy executive David C. Lawler, who left the Oklahoma City company six years ago to become CEO of Denver’s BPX Energy has been picked to be the next chairman and president of BP America Inc.

BPX Energy is BP’s Lower 48 division and Lawler will keep his CEO title when he succeeds Susan Dio on July 1, according to Reuters and a company press release. London-based BP PLC has its U.S. headquarters in Houston.

Dio became the first woman appointed chair and president of BP America in 2018. She will retire after 36 years with the company.

“Susan has been an extraordinary leader and mentor throughout her impressive career — and especially in America,” BP PLC CEO Bernard Looney said in the release. “She strengthened our culture of safety and respect and shattered barriers everywhere she went.”

Lawler joined BP as head of its American shale assets business in 2014 after serving as Oklahoma City-based SandRidge Energy Inc. executive vice president and COO. He was appointed just months before BP formally established a separate business to manage its onshore oil and gas assets in the continental United States. In December 2016, the company announced that the Lower 48 division would move its headquarters to Denver.

The May 28 press release does not indicate whether Lawler will remain in Denver or relocate to Houston, nor does it indicate any shift of the Houston headquarters to Denver.

“Beyond a track record of delivering strong safety, environmental and commercial results, Dave brings an authentic and inspiring leadership style,” Looney said. “His curiosity and willingness to do things differently will be essential as we reinvent bp and reimagine energy for people and our planet.”

Reuters reported Lawler’s promotion and Dio’s retirement less than a week ago. They’re just two of the changes set to take effect July 1 as BP cuts its leadership positions from 250 to about 120, according to emails to staff seen by Reuters. The remaining leadership positions will include more than 100 so-called “Tier 2” managers who will lead the 11 divisions Looney created in February in an effort to reinvent BP, per Reuters.