Inhofe and others urge FERC to cut regulatory burden

Fracking King title no longer rests in the Permian 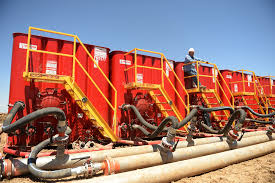 The Permian Basin in West Texas and southeast New Mexico is no longer the frack king of the U.S. That honor now belongs to the Marcellus Shale region of Pennsylvania and West Virginia where drilling for gas is more prevalent than the search for oil.

The reason? The plunge in rig activity in the oil-rich region of Texas and New Mexico according to data reviewed by the San Antonio Express-News.

Friday brought still more bad news from the Permian and oil fields across the nation: The rig count, an indicator of U.S. oil and gas production, continued to plummet for an 11th-straight week.

The new data is further proof of the damage the coronavirus pandemic has done to the oil and gas industry. In fewer than five months, the pandemic and efforts to slow its spread, including orders to stay at home, have destroyed global demand for crude and sunk oil prices to record lows. The loss of demand for oil has forced companies to cut operations and slash thousands of jobs, including many fracking crews.

The cutbacks have left the Marcellus with 31 percent of a diminishing number of active crews, according to a report by Houston investment advisory firm Tudor, Pickering, Holt. The Permian is second with 30 percent, followed by the Eagle Ford Shale in South Texas and the Haynesville Shale in East Texas and Louisiana with 14 percent each.

Of the 450 available hydraulic fracturing fleets in the United States and Canada, only 70 are deployed in the field, Tudor, Pickering, Holt said.

Some industry experts believe that there are fewer than 50 active hydraulic fracturing fleets in the field, but Tudor, Pickering, Holt Managing Director George O’Leary says “both levels are putrid.”

The same could be said for the rig count, which declined to 318 across the nation, 21 fewer than a week ago, according to Baker Hughes, a Houston oil-field service company that has tallied the count since 1987. At the worst of the 2014-16 oil bust — the previous record low — there were 404 rigs operating.

The rig count has plunged by more than 50 percent since mid-March and is down almost 70 percent compared with a year ago, when there were 983 rigs in operation.

Most of the losses this week came from Texas, where operators idled 12 rigs. Texas, which has 138 rigs in operation, is home to most of the Permian Basin and hosts about half of the nation’s oil and gas rigs.

In mid-March, the Permian region had 405 rigs in operation. By May 12, that number had fallen by 57 percent to 175. The Eagle Ford and Bakken regions saw similar declines of 64 percent and 69 percent, respectively, during the same period.

“Changes in the number of oil rigs have historically followed changes in oil prices with a lag time of about four months,” the EIA said in a report this week. “However, the current drop in rig count followed the recent decrease in the oil price much more rapidly than in the past.”