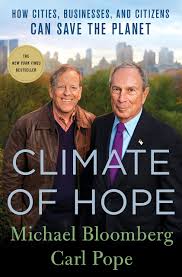 Writing an opinion piece for Bloomberg, former Sierra Club chairman Carl Pope who is also an adviser to Michael Bloomberg took advantage of his connections to attack the oil and gas industry.

The huge financial aid package enacted by Congress this spring entailed a sprawling array of programs to direct funding, guarantee loans, relieve debt and more to support businesses laid low by a global pandemic. It also opened the door to a money grab. As a result, hundreds of millions of dollars are likely to end up in the pockets of oil and coal investors and executives in what may be the biggest campaign donor payoff in U.S. history.

Failing oil and coal companies quickly moved to exploit the bailout as a financial lifeline. They had help. Seventeen Republican senators sent a letter in April to the Federal Reserve, effectively urging the use of coronavirus rescue funds to bail out bad coal and oil debt.

In a separate letter to President Donald Trump, a group of three dozen senators and representatives argued that banks should be punished for “discriminating against America’s energy sector” by denying financing to sinking fossil fuel companies. Conservatives have long demanded that the market should decide such matters. But the oil patch plays by different political rules.

Funneling taxpayer funds to failing companies in a declining industry that wreaks trillions of dollars in damage on the environment is not an easily justified investment. Yet the Federal Reserve, which sets loan guidelines for some of the rescue package, changed the rules of its “Main Street” lending program to allow companies to use taxpayer loans to pay off existing debt instead of retaining workers.

Under pressure from Republicans, the Federal Reserve also increased the maximum loan amount in the Main Street program to $200 million. At the same time, the rules were tweaked so that credit ratings could be ignored. A separate bond buyback plan could end up bailing out 90 fossil fuel producers along with 150 electric utilities that have financial exposure to the sector, according to one analysis.

In addition, a small business assistance program intended for mom and pop companies was raided early by coal and oil companies, which collected a combined $50 million. Three of the bailed-out companies have employed executives who have worked in the Trump administration, including the scandal-tarred former Environmental Protection Agency administrator, Scott Pruitt.

When Democrats in Congress complained about public subsidy of environmental degradation and business failure, the Fed insisted that its program changes were not targeted to help coal, oil and gas companies. However, oil-state senators and Secretary of Energy Dan Brouillette couldn’t help bragging that the goal was exactly that.

The largesse has little to do with preserving jobs. Coal and oil companies had already begun large-scale layoffs, and they won’t bring those workers back no matter how much money the government showers on them. The reason is elementary: The market wants less of their product. Some shale-oil drillers are paying to have oil taken off their hands because they have no place to store it. The rig count in the Permian Basin, around West Texas, fell by 50 percent in the past five weeks. As new wells are completed, employment will fall further.

The decline in fossil energy long preceded Covid-19. Most of the nation’s coal companies had been through at least one bankruptcy. Shale oil producers lost a collective $189 billion over the past decade. In 10 of the last 11 years the oil industry was the largest issuer of junk bonds.

The rationale behind the giveaways to favored oil, coal and gas interests isn’t economic, it’s simple smash-and-grab. According to Bloomberg News, Diamond Offshore Drilling Inc. obtained a $9.7 million tax refund through the rescue package. Then, it turned around and requested that a bankruptcy judge authorize that same amount in bonuses for nine executives.

Republicans intend to redirect hundreds of millions from American workers into the pockets of investors who made bad bets on failing oil and coal companies. The source of the oil slick is in the swamp.

This column does not necessarily reflect the opinion of the editorial board or Bloomberg LP and its owners.

Carl Pope is a former chairman of the Sierra Club, an adviser to Michael R. Bloomberg and the author, with Bloomberg, of “Climate of Hope.”