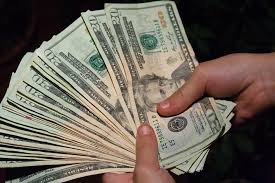 A congressional race in South New Mexico is turning expensive as national Democrats have entered the fray as they fight the efforts of Claire Chase, a businesswoman who is connected to the state’s oil and gas industry.

POLITICO reviewed the GOP primary in NM-02 and reported Democrats are supporting ex-state Rep. Yvette Herrell who was the 2018 nominee in a fight over Claire Chase.

Patriot Majority PAC, which is a Democratic-aligned group, is making the biggest play in the district. The super PAC is out with a new TV ad, saying Republicans in the district have “a choice”: “Santa Fe Lobbyist Claire Chase, who opposed President Trump” or Herrell, who is “100 percent loyal to Trump” and is backed by “cowboys for Trump.”

The group is spending $180,000 to air the ad, which hit the airwaves on Saturday, along with $48,000 in digital advertising and about $8,000 in radio advertising, according to a FEC report filed over the weekend. The group is playing coy about its intentions: The TV ad ends with the tagline “New Mexicans deserve a better choice,” and the spending is reported as opposing both candidates. (Craig Varoga, the president of the group, said “our goal is to define two unqualified candidates in preparation for the general election, regardless who wins the primary, and that’s what our ad does,” in a statement to Score earlier last week when we noticed the spending but before we actually got our hands on the ad creative.) 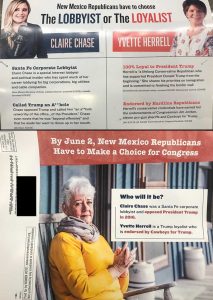 But we’re under no illusions about the actual intention of the ad: It is meant to boost Herrell, who now-freshman Democratic Rep. Xochitl Torres Small defeated by 2 points in 2018, at the expense of Chase. They’re also not the only Democratic group wading into the primary. Women Vote!, the super PAC arm of EMILY’s List, also reported just under $23,000 in spending on a mailer “opposing” both candidates, with a similar message as the TV ad. (A source in the district passed along the mailer to Score.) National Democrats likely see Chase as the stronger opponent; she has been redboxed by the DCCC since late March.

The district, which spans rural southern New Mexico, is a top GOP target. Trump won it by 10 points in 2016, and some GOP operatives think Herrell, who was plagued with ethical issues, lost a winnable race. Chase is wealthy and can self fund, but she also comes with some baggage, too. She wrote several Facebook posts criticizing then-candidate Trump, including one that called him an “a**hole unworthy of the office.”

It is the latest turn in what has been a quite acrimonious primary between Herrell and Chase. ( The AP’s Russell Contreras has a good story from earlier this month detailing the primary, which has seen accusations that Herrell was pushing false rumors about Chase’s first marriage, which Herrell denied.)

Other groups are also wading into the race. House Freedom Fund, the political arm of the House Freedom Caucus, has weighed in on behalf of Herrell. Meanwhile, the pro-Chase, Citizens for a United New Mexico has spent at least $225,000 on the race, with the backing from some New Mexico donors and from WFW Action Fund, a relatively new Republican group backing Republican women. A pro-Herrell group called Make New Mexico Great PAC has also sprung up — but they didn’t report any donations in their recent pre-primary report and didn’t start spending until after cutoff for the report, so we won’t get a look at who is behind the group until after the primary is already held.