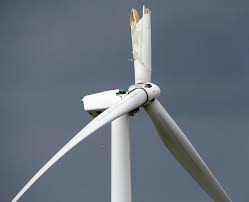 Technicians at NextEra Wind Energy in south central Kansas suspect a strong thunderstorm played a role in causing extreme damage to one of the company’s wind turbines.

It was near the small town of Cairo in Pratt County where a blade was broken off and the generator was badly damaged, according to the Pratt Tribune.

Conlan Kennedy, NextEra communication specialist, said the turbine was damaged the night of April 16. Members of a NextEra wind technician team said there was a big storm in the area that night and the team was investigating the possibility of a lightning strike but the cause is still under investigation, Kennedy said.

One blade was broken off near the hub and lies at the base of the turbine. A portion of the generator covering is missing and the generator is leaning off center. The damaged unit is about two miles south of Cairo in eastern Pratt County.

NextEra is working with the manufacturer to identify replacement parts and the cause of the damage. No timetable has been set for repairs to the turbine. No one was injured during the incident and the landowner where the turbine is located was notified. The wind farm, located in the southeast quadrant of the county, is under constant remote surveillance and the problem was instantly found.

“Turbine malfunction is very rare. We monitor our turbines 24/7 and our team could see instantly when the turbine went offline,” Kennedy said.

There are 106 turbines at the wind farm that went online in December of 2018. The rest of the turbines are fully operational and generating electricity. The turbine measures approximately 486 feet from the ground to the tip of the top blade.