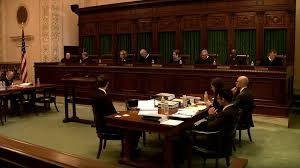 The budget fight between Gov. Kevin Stitt and Republican leaders of the legislature, spurred when the legislature cut funding for his digital transformation effort is headed to the Oklahoma Supreme Court on Monday.

When legislators cut funding, the governor delayed a meeting of the state Board of Equalization which meant there was no approval of funding for a state revenue failure. Republican leadership responded with a lawsuit this week and the Supreme Court will hear arguments Monday morning at 10:30. The lawsuit asked that the Board be ordered to meet and approve giving access to the legislature for more than $300 million in state savings to finish the remainder of the Fiscal Year.

Shortly after the court issued its order for oral arguments, the governor’s office indicated the Board of Equalization would meet Monday afternoon at 3 o’clock.