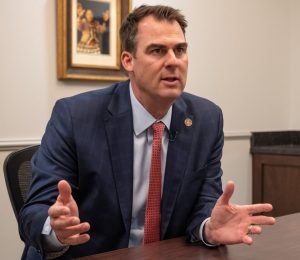 Oklahoma Gov. Kevin Stitt was one of five Governors to ask the Trump administration this week for a nationwide waiver exempting the oil-refining industry from the nation’s biofuels law to help oil and gas operators survive the oil crisis caused by the coronavirus pandemic.

“As our country comes to grips with this national emergency, continuing to implement the current (biofuel requirements) imposes an added obligation that would ‘severely’ harm the sector, and consequently harm the economy of the States and the Nation,” stated Stitt and the governors of Texas, Wyoming and Utah after Louisiana’s governor sent a separate letter. Each was sent to Environmental Protection Agency Administrator Andrew Wheeler.

“On behalf of our States, and in light of economic circumstances facing our States and the Nation as a whole, please expedite this request for a waiver of the renewable volume obligation (RVO) under the federal Renewable Fuel Standard,” they wrote in the  letter.

The exemptions were overturned by a 10th U.S. Circuit Court of Appeals ruling in recent weeks and directly applied to the CVR Refining company in Wynnewood, Oklahoma as well as two other small refineries in Wyoming.

Under the U.S. Renewable Fuel Standard, oil refiners are required to blend billions of gallons of biofuels like corn-based ethanol into the country’s fuel each year or buy credits from those that do, a policy that helps farmers but which the oil industry says costs it a fortune.

The EPA, which administers the RFS, mandated that oil refiners blend 15 billion gallons of ethanol in the country’s fuel supply in 2020, along with roughly 5 billion more gallons of other types of biofuels.

The request places Republican President Donald Trump, who is seeking re-election in November, in a tough spot between the oil and agriculture industries, two important constituencies. They are being particularly hard-hit by the global pandemic as it decimates energy consumption, breaks transport supply chains and makes labor harder to come by.

The governors argued that because the coronavirus pandemic had sharply reduced U.S. demand for gasoline since that mandate was announced, it would be unfeasible for refiners to hit those targets. They pointed out that prices for blending credits had also recently tripled, raising the costs for refiners.