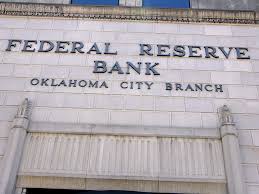 The Federal Reserve Bank of Kansas City released the first quarter Energy Survey this week, showing how energy activity in the Tenth District that includes Oklahoma decreased at a steep pace and expectations for future activity dropped further.

“District energy activity fell sharply during the first quarter of 2020, with our index dropping to its lowest level since we began the survey in early 2014,” said Chad Wilkerson Oklahoma City Branch executive and economist at the Federal Reserve Bank of Kansas City.

He said many of the survey findings reached record lows.

“Expectations for future activity also fell to their lowest level since late 2014, as most firms do not expect energy prices to
return to profitable levels this year.”

The Kansas City Fed’s quarterly Tenth District Energy Survey provides information on current and expected activity among energy firms in the Tenth District. The survey monitors oil and gas-related firms located and/or headquartered in the Tenth District, with results based on total firm activity. Survey results
reveal changes in several indicators of energy activity, including drilling, capital spending, and employment.

Firms also indicate projections for oil and gas prices. All results are diffusion indexes – the percentage of firms indicating increases minus the percentage of firms indicating decreases. A summary of the first quarter survey is attached.
The Federal Reserve Bank of Kansas City serves the Tenth Federal Reserve District, encompassing the western third of Missouri; all of Kansas, Colorado, Nebraska, Oklahoma and Wyoming; and the northern half of New Mexico.

The survey took place between March 16 and March 31, the period when energy firms were contacted.

The future revenues and profits indexes dropped steeply to the
most negative readings in survey history. Price expectations
for oil and natural gas liquids decreased compared to the
previous quarter, while price expectations for natural gas
rose.

This quarter firms were asked what oil and natural gas
prices were needed for drilling to be profitable on average
across the fields in which they are active (in alternate
quarters they are asked what price they need for a
substantial increase in drilling). The average oil price
needed was $47 per barrel, with a range of $25 to $65
(Chart 2). This average was below the prices reported in
2019, and the lowest recorded profitable price. The average
natural gas price needed was $2.74 per million Btu, with
responses ranging from $1.90 to $4.50.

Selected Energy Comments
“These are unprecedented times. The combination of the supply shock (Saudi and Russia supply increase) and
demand shock (COVID-19) are introducing challenges we have never seen before. We are hunkering down to
live within cash flow.”
“We cannot continue producing oil below the cost to produce it. Prices must go up, but there is a world-wide
oversupply keeping prices down.”
“Long term $30 per barrel (oil price) will lead to massive consolidation and insolvency. I’m estimating that
some will be able to hang on for another year, but two years probably reduces E&Ps significantly.”
“I don’t know of any companies that can operate profitably at that price ($40/bbl oil). The ones that stay solvent
have cash reserves, refining or other revenue streams to keep them solvent.”
“Long term, $40 is not enough. Some will be able to survive but many/ most will not.”
“The longer the price stays at $30 the more likely our competitors will fail. Even those who have hedged have
likely only hedged a portion of their production and likely for a year or two out.”
“The oilfield is generally highly leveraged and these commodity prices will not sustain the bulk of firms in the
industry.”
“Electrical demand for transportation fuel will help natural gas prices stabilize, along with LNG exports giving
natural gas the ability to become a fungible global commodity.”
“Saudi/Russia fight for market share could last 6-18 months. COVID-19 demand destruction likely to last 3
months.”
“The next year is going to be bad due to the demand destruction related to the shutdown of the world economy
due to COVID-19. As the market balances over the next 18-24 months prices should start to improve.”