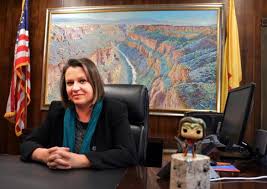 Commissioner Garcia Richard said the companies will have a possible extension up to 120 days in light of the COVID-19 pandemic and its effects and the Russia and Saudi Arabian price war.

“Here in New Mexico, the ripples of this situation hits hard, not only when thinking about the state budget, but within communities where people rely on the boom for jobs to support their families,” Commissioner Richard said. “Due to these factors, I’ve determined that it is in the best interest of the beneficiaries of state trust land – our public schools, hospitals, and universities – as well as the employees dependent on this industry, that we allow companies to apply for these temporary shut-ins until we can better predict the future of the Permian Basin.”

The overproduction of oil in the world market has not only drastically reduced the price of oil, but it has also created a situation where some U.S. companies are being forced to scale back production because pipelines and storage facilities are at holding capacity.

Public comment is encouraged and will be accepted for two business weeks, until Friday, April 17, 2020.

A tele-hearing to discuss the rule and hear further public comment will take place Friday, April 17, 2020 at 1:00 pm.