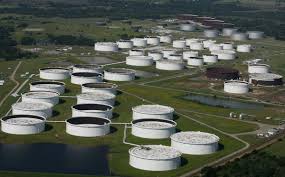 With the downturn of oil, the importance of hedges by oil companies and the ability to store oil in Cushing, Oklahoma becomes more critical.

Hedging locks in place the price of future oil but the oil exploration companies that employ the practice also need a place to store the oil. That’s where Cushing comes in and as we’ve reported earlier in March, there’s a demand for more storage tanks at the north central Oklahoma storage site.

The Denver Business Journal explored “hedges” in a report on how the practice affects Colorado drillers.

As oil and gas companies cut back their 2020 production plans in the face of global crisis, the hedges companies have in place — and how much of their oil production is covered by them — could end up being a critical lifeline.

It’s normally a mundane part of the business, but events have thrust it to center stage for many companies.

“It really helps stabilize their business and stabilize their cash flow,” said Justin Carlson, co-founder and chief strategy officer of East Daley Capital, an oil and gas industry analysis firm based in Centennial.

Hedging uses various techniques that contractually lock in future oil-sale prices or use financial instruments that pay oil companies if prices drop steeply, acting as a form of insurance.

In good times, hedging can limit the upside price a company sees from its oil. In bad times, hedges can make the difference between being able to pay the bills or running short of money.

Most oil and gas companies treat hedges like car insurance; they don’t always talk about it, but hedges are important to have in place for when they are needed.

Carlson’s company estimates about half of the Denver-Julesburg Basin’s oil and gas production in 2020 and 2021 is hedged.

Some Denver-based independent producers have highlighted their aggressive hedging protection to reassure investors.

Highpoint Resources Corp. (NYSE: HPR) has scrapped plans to drill new wells to save money until oil prices improve. Domestic crude oil has been selling below $23 per barrel through much of mid-March, below what most Colorado oil and gas companies are believed to need to break even.

HighPoint has hedged sales covering about 90% of its anticipated oil output from existing wells in 2020, and the hedges are set up to fetch an average of $58 per barrel.

The company estimates that, at current prices and with hedging costs, its hedged sales are currently worth $225 million, said Scot Woodall, HighPoint president and CEO, in an update to investors.

The company expects to produce 24,000 to 25,000 barrels of crude oil and natural gas liquids per day. The hedges on its crude oil sales from April through the end of 2020 cover between 12,500 barrels and 13,500 barrels per day of crude and set an average floor price of $50 per barrel, the company says.

About 70% of U.S. oil and gas producers started 2020 with hedges on at least some of their crude oil production, according to a study by Houston-based Opportune LLC.

Not everyone believes in hedging.

As world markets began to turn in early March and he announced his April retirement, Papa said he holds to his stance against hedging

“Since we can’t tell exactly when this is going to turn around, I’d say at least at this period in time, it’s probably not a good time to hedge oil,” he said.

Both HighPoint Resources and Bonanza Creek project that hedging will generate enough revenue give the companies cash beyond operating expenses and debt payments this year.

That’s really the strategy for most companies — have enough resources to survive and be able to grow again when the market recovers, Carlson said.