Southwest parks a lot of its planes 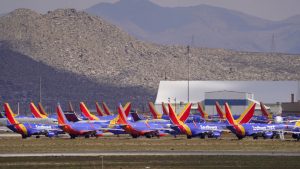 Instead of flying from one major city to another in the U.S., Southwest airliners are being parked by the dozens, a result of a large drop in customers afraid to fly because of the COVID-19 pandemic.

CEO Gary Kelly announced this week the airline is not only parking more planes, but is considering early retirement packages for workers.

In a video message to employees, Kelly said the company needs to be focused on “conserving cash and making good financial decisions” to help navigate the sudden economic difficulties resulting from the downturn brought on by the virus and global attempts to stymie its spread, according to the Dallas Morning News.

“In the end, you got to have cash, you know, otherwise, none of us have jobs,” Kelly said.

Dallas-based Southwest has already suspended about 1,500 daily flights, about 40% of its schedule. Some of those suspended flights were to Oklahoma City’s Will Rogers World Airport. Reports indicated some Southwest airliners were only 20% filled with flying customers.

But like other airlines, it’s failing to keep up with how fast customers are abandoning flying. It’s also frozen hiring, suspended share repurchases and trimmed Kelly’s salary by 10%.

But as the United States became the global leader in the number of confirmed COVID-19 cases, travel and social gathering restrictions have become more intense, including a 14-day quarantine on anyone traveling to Texas from states such as New York, California, Washington and Louisiana.

On Sunday, the number of passengers getting on planes at airports dropped by more than 92% compared with a year earlier, according to data from the Transportation Security Administration.

As of Monday, Southwest has parked 50 of its 737-700 planes in Victorville, Calif. That’s up from the 24 it announced two weeks ago and in addition to the 34 Boeing 737 Max jets in storage for more than a year after the aircraft was grounded by the Federal Aviation Administration.

Kelly said he is unsure how many more planes the airline will have to ground.

“We’re taking some of our aircraft that are perhaps older, have some maintenance coming up,” Kelly said. “We won’t be spending money on those airplanes right now to go through a significant overhaul, and they’ll save us a lot of cash here in the near term.”