Southwest parks a lot of its planes

Nebraska-based Siouxland Ethanol is shutting its operations because of the low demand for the corn-based fuel additive in the midst of the coronavirus pandemic.

Located in Jackson, Nebraska the company posted a “special alert” on its website this week, predicting U.S. ethanol production would have to be slashed by 50 percent before production could be restarted at the 80-million-gallon plant according to the Sioux City Journal.

“The negative impact of the COVID-19 pandemic on gasoline and ethanol demand in the United States is severe,” the statement read in part. 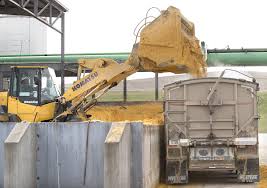 In its statement, the Northeast Nebraska plant said its employees would remain “in tact” (intact).

“We intend to keep our balance sheet and financial position strong, our employees in tact, and we look forward to resuming production as soon as economic circumstances allow,” the statement continued.

Ethanol prices crashed this month — from a little more than $1.37 on Feb. 19 to as low as just over 90 cents a gallon by March 23, according to figures on the NASDAQ exchange. Prices had rebounded to above 99 cents as of Friday.

Crude oil prices have also plunged in recent weeks, bruising the oil industry. West Texas Intermediate fell to below $21 a barrel last week, according to the Associated Press. Ethanol markets tend to be dragged down when oil and gas prices slump.

Monte Shaw, executive director of the Iowa Renewable Fuels Association, said the current situation in the ethanol industry is worse than the problems of last fall, when a number of plants faced closure after President Donald Trump issued a series of waivers to oil refineries allowing them not to blend ethanol into gasoline.

“I don’t want to sugarcoat it, it’s dire, it’s ugly out there,” Shaw said — though he stressed that not every ethanol plant is will stop production.

Shaw said he expects ethanol plants in Iowa will reduce capacity and, in some cases, shut down completely until market conditions improve: “A sizable chunk of our industry is going to have to be taken off-line, one way or the other, for however long this lasts.”

“I don’t think we’ve seen the end of it, until we know where the bottom on gasoline demand is,” he said.