Sen. Lankford—angry and frustrated with Democrats 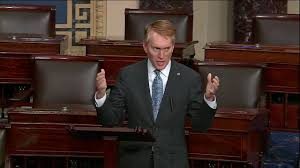 A visibly frustrated Oklahoma U.S. Sen. James Lankford took to the Senate floor on Tuesday, angry over the holdup in a Senate vote on the third phase of relief to address COVID-19.

He warned that in his home state several businesses are on the brink of closing their doors unless they can get some relief. The Republican Senator pleaded with his colleagues to come to the table to vote and give Americans the help they needed.

His office later released portions of his speech.

Senator James Lankford: We thought we were done. For the sake of the American people we need to be done. We have folks at home across the entire country that are trying to figure out if they can get a loan, if they can keep their business going, if they can pay their employees. They have no income coming, and all that is coming out of this body is ‘We’re close. We have a few more things that we want to discuss.’

Senator James Lankford: A lady from southwest Oklahoma called yesterday literally in tears saying that she has a small business, and there’s little to no business going on right now with no cash flow, and she doesn’t know about she and her husband’s retirement. And she doesn’t know why the bill didn’t pass yesterday. And all we could say to her was, ‘We don’t know either,’ because it was suddenly a new set of issues that seemed to be all day long Sunday, Monday, and now we’re deep into Tuesday and we still can’t get a set of answers.

Senator James Lankford: I had a lady from southern Oklahoma who called me because the day care center where her daughter works is closed down. Doesn’t know what’s going to happen and wanted to know, she’s heard about this possibility of a check being sent out to every American. That would sure be helpful right now and wanted to know when that was coming. All I could say was, I don’t know. We’re waiting on our Democratic colleagues to finish compiling their list of the other things they want to add into this bill so we can even discuss it.

Senator James Lankford: So let me just say real quick what’s in this bill and why it’s so important to us. Additional money for testing, additional money for work on vaccines, additional money on trying to be go through treatments, ventilators. Literally billions of dollars that go to hospitals and clinics and nursing homes and senior centers. One section of the bill has $75 billion, another section of the bill has $40 billion just for hospitals and for health care. The hospitals are all telling us the same thing, we need help and we need help right now. And I would say back to them, would love to except we seem to be parked on the 2-yard line while other folks are saying we’re close. We’re still thinking of a few other things we want to get in.

Senator James Lankford:  Why in the world are we holding up small businesses and holding up checks to individuals and cutting off support for nonprofits because we’re thinking about a few things like solar panels and carbon neutral foot prints for airlines? Why don’t we get this done? Because the time is important.

Senator James Lankford:  in the meantime small businesses and people across the country are saying ‘can I get the first dollar while you’re arguing about the 15-billionth dollar? Can I get some help now? Time is important. Let’s stop pretending it’s not. It may not be to some folks in this room. It is to the four million folks in my state.

Senator James Lankford:  We were ready on Sunday with this bill and thought we were voting on it to finish it. Now 48 hours later, the other side is still thinking about something they might want to add into this. Let’s vote.