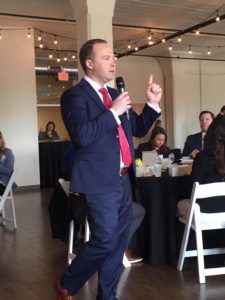 Nearly 100 renewable energy advocates who belong to the Oklahoma Power Alliance spent Tuesday lobbying state legislators about the benefits of wind and solar power in the state.

“Lawmakers need to understand this is not some far-off future–this is now,” said Mark Yates, Vice President of the Alliance as he spoke to the 100 gathered for a luncheon prior to visiting Representatives and Senators at the Capitol.

He pointed out how wind power and solar are producing increased amounts of electricity every year in Oklahoma while demand for coal is tumbling.

Those who lobbied the legislators were armed with fact sheets showing how gas energy provides 46.3% of Oklahoma’s power generation while wind provides 40.2%. The sheets also explained how there are 5 wind technician training programs at schools in Oklahoma and the average starting salary for a wind technician in rural Oklahoma is $52,000 a year.

The wind industry has $20 billion invested in Oklahoma, a state that is ranked second nationally for wind power generation. 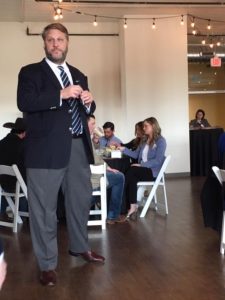 “No state does it better than Oklahoma,” said Jeff Clark, Executive Director of the Wind Coalition who spoke to the group. “Oklahoma will be a state that other states look at in years as to renewable energy leadership.”

The Clean Power Alliance used the luncheon to honor Kingfisher Rep. Mike Sanders for his legislative efforts to boost renewable energy. It honored him with a Clean Energy Legacy award. 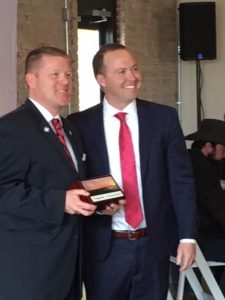 The Alliance also honored Kathy Jackson, founder of the Spiritwind Kidz Ranch who works with schools in educating young people about renewable energy efforts in Oklahoma.