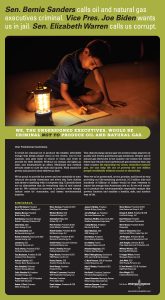 More than 50 oil and gas industry leaders including Harold Hamm of Oklahoma City-based Continental Resources responded to Democratic Presidential candidates and their criticism of the industry with a New York Times full-page advertisement.

Bryce Conway, President and CEO of Weatherford-based Flex-Chem Corporation, an advertiser on OK Energy Today, also was among the 54 executives who signed the letter. He was joined by George H. Selich, President and CEO of FourPoint Energy LLC of Denver, a company active in oil and gas exploration in western Oklahoma.

The executives used the Feb. 24 ad and “forcefully pushed back against months of claims that they are corrupt criminals who should be jailed.”

The advertisement was placed by Western Energy Alliance in response to statements that the Alliance said “have gone unchallenged by Sen. Bernie Sanders, former Vice President Joe Biden and Sen. Elizabeth Warren by explaining the environmental and life-sustaining benefits of oil and natural gas.”

The executives asserted it “would be criminal not to produce oil and natural gas.”

The full-page ad features a young boy studying by lantern light, one of the billion people worldwide who lack access to affordable, reliable electricity. Exports of American natural gas could help him and others suffering from energy poverty raise their standard of living.

According to a recent report by the International Energy Agency, the United States again leads the world in reducing greenhouse gas emissions, largely because of increased natural gas electricity generation. In addition to the environmental benefits, abundant supplies of American natural gas have kept home heating prices so low that  11,000 deaths are averted annually during cold weather.