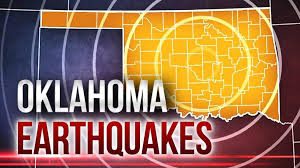 Earthquakes have been recorded throughout Oklahoma in the past few days with at least seven occurring in less than 24 hours. But nearly 20 were recorded since the weekend.

The strongest measured 2.5 in Pittsburg County on Monday, March 23  and 2.6 in Dewey County, according to the Oklahoma Geological Society.  Close to 20 minor earthquakes have been recorded in the state since Saturday, March 21.

The OSGS reported the first quake occurred Saturday in Woodward County and measured 1.1 magnitude. On Sunday, at least 8 other tremors were recorded in Payne, Major, Logan and Woodward counties ranging in strength from 0.9 to 1.7 magnitude.