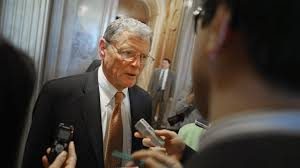 Oklahoma U.S. Sen. Jim Inhofe was apparently the Senator behind the letter sent to the EPA this week urging the agency to continue granting relief to small refinery operators from meeting Renewable Fuel Standard requirements.

He and eight other Republican Senators, including Oklahoma U.S. Sen. James Lankford sent the ltter to EPA Administrator Andrew Wheeler who once worked for Sen. Inhofe when he chaired the Senate Environment and Public Works Committee.

The letter was in response to a 10th U.S. Circuit Court of Appeals ruling in Denver against one southern Oklahoma refinery and two others owned and operator by HollyFrontier.

The full text of the letter to EPA Administrator Wheeler can be found below and here.

It is our understanding that the U.S. Environmental Protection Agency (EPA) may be considering changes to the small refinery exemptions (SREs) available under the Renewable Fuel Standard (RFS).  It is already our view that EPA’s decision to prospectively reallocate 770 million gallons in potential SREs in the 2020 renewable volume obligation (RVO) was imprudent and misguided.  Now, EPA would risk compounding this error by not issuing SREs equal to this amount, thereby massively increasing the burden placed on U.S. refineries.

Let us be clear, should the Agency limit SREs in reaction to a new policy or legal decision, it is vital that any reductions in SREs be harmonized with precise adjustments in the 2020 RVOs established under the RFS.  Any misalignment between SRE volumes and the RVO would result in skewed markets, higher renewable identification number (RIN) prices, and enhance the likelihood of consequent job losses, business failures, and adverse consumer impacts.

Just on speculation regarding potential EPA action, RIN prices have tripled since the January 2020 decision issued by the United States Court of Appeals for the Tenth Circuit that invalidated certain SREs.  If this trend continues, we anticipate that critical refining assets will be harmed, along with tens of thousands of direct and indirect jobs that depend upon those facilities and their value chain.  This result would harm small retail businesses, consumers at the pump, and the energy security of our nation as a whole.

At a bare minimum, if 2020 SREs are significantly reduced off projected amounts, then EPA must harmonize the RVO and adjust the 770 million gallons in reallocated volumes intended to address potential future SREs. Furthermore, we urge EPA to look to other ways to grant relief to small refineries that have been disproportionately harmed by compliance with the RFS. Should EPA attempt to increase burdens on refiners by other means – perhaps citing to past waiver volumes referenced in a July 2017 D.C. Circuit decision – that action would be at variance with EPA’s own past statements that retroactive recovery of such past volumes would be highly disruptive, and inconsistent with past practice.

We assume any EPA contemplated adjustments in SREs would be related to the January 2020 decision issued by the Tenth Circuit.  However, because the decision is contrary to the statute, we believe EPA must assert a strong appeal.  We expect EPA to do so expeditiously, because the Tenth Circuit’s decision undermines the protections Congress intended to extend to small refineries from the costs of the RFS program.

Finally, it is long past time to address the problems associated with RIN prices.  This is the proper policy goal and demonstrates a “win-win” solution that would provide refineries with long-term cost containment and allow U.S. biofuel consumption to grow.  We continue to be in favor of discussions related to achieving these goals. In the meantime, the Agency must not sit idly by as RIN prices rise, jobs are put at risk, businesses face viability concerns, and consumers who cannot afford it are hurt at the pump.