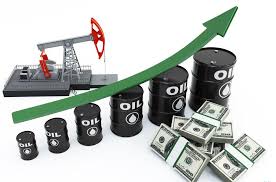 Crude oil prices rebounded by more than 23% on Thursday in trading in the U.S. with the front-month April West Texas Intermediate crude contract going up $4.85 and ending the day at $25.22 a barrel.

It was considered to be the largest one-day front-month percentage climb on  recorded based on information going back to March 1983 according to Dow Jones Market Data.

The increase came one day after the WTI contract plunged more than 24% to settle at $20.37 a barrel on the New York Mercantile Exchange, which was the lowest finish since Feb. 20, 2002.

Natural gas finished the day up 5 cents to settle at $1.65 Mcf, a change of more than 3%. The U.S. Energy Information Administration reported Thursday that domestic supplies of natural gas fell by 9 billion cubic feet for the week ended March 13. Analysts, on average, expected a decline of 8 billion cubic feet, according to a poll conducted by S&P Global Platts.

Of some Oklahoma stocks, Chesapeake Energy ended the day at 19 cents a share, an increase of 0.008.