Confusion over whether Biden joins call to ban fracking in US 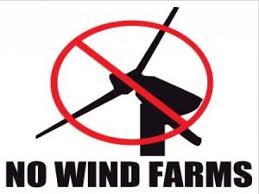 County Commissioners in St. Joseph, Missouri have approved a total ban on commercial wind energy farms in their county.

Buchanan County Commissioners took the move after their Planning and Zoning Commission recommended the action.

The Planning and Zoning Commission held a work session on Feb. 19 and recommended the total ban by a vote of 8-4 according to the St. Joseph News-Press.

The commissioners stated five notes in the order. The notes are as follows:

Not a single member of the public testified at the public hearings in favor of allowing commercial wind-energy projects within the jurisdiction of Buchanan County, Missouri.

Commercial wind energy projects have a potentially negative impact on nearby property values in Buchanan County.

Buchanan County has a unique rural population that is greater than that of other counties that have adopted commercial wind energy projects.

Citizens of Buchanan County voiced concern regarding potential noise pollution and other quality of life issues related to the installation of commercial wind energy projects.

There was a concern regarding the ability to effectively adopt a provision ensuring funds for the decommissioning of commercial wind energy projects.

Ron Hook, Western District county commissioner, said that they had heard people against and in favor of the turbines, but they decided to make the decision based off the vocal majority against and the concerned citizens who spoke at the two public forums.

“I think our decision was basically based on what our constituents wanted. What people in Buchanan County wanted,” Hook said.

The process took three weeks for the County Commissioners to sign the order and approve the recommendation from the Planning and Zoning Commission.

“We took a methodical process,” Presiding Commissioner Lee Sawyer said. “We talked to a lot of people, we looked at best practices around the country, we looked at like counties to see what they had done.”

Hook said while wind energy did not work for the county, the county can continue to listen for options to expand wind energy.

“I think we need to step back and just wait and see what technology brings us,” Hook said. This is an ordinance that’s in place, effective now, but that ordinance can be changed, modified — it’s a working document.”

Scott Burnham, Eastern District county commissioner, represents the part of the county that was proposed to be targeted for wind turbines by the Florida-based energy company NextEra. He said that he was proud of the Planning and Zoning Commission on the diligence they took throughout the process.

“There was a lot of effort and energy and it was a big time commitment for them that went in,” Burnham said. “I commend them for their efforts and the time that they’ve put into this.”

Steven Reardon, the representative for Marion Township, was the one who sent the proposal through to the commissioners in February. He said that he believed the commissioners handled this process well and that this was ultimately what the public wanted and the proponents did not step forward.

“I’m happy with the way the public came together and showed what they wanted,” Reardon said. “It should not be an issue now.”

Anita Simon was one of the leaders of the group Friends of Buchanan County. The group was formed to present planning and zoning as well as the county commissioners with why they were against the turbines. The group had a vocal presence at the public hearings and had over 700 signatures signed against the wind turbines.

Simon said she was very pleased and believes it is the best thing that could happen for the county. She said the commissioners followed a process just as they had promised.

“It was all worth the effort,” Simon said.

Friends of Buchanan County said in a press release they applaud the commissioners for approving and adopting the recommendation from planning and zoning.

“We thank the Planning and Zoning Commission for honoring the clear and overwhelming voice of the public in opposing commercial turbines in our densely populated county,” said the press release.