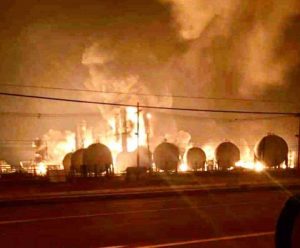 After fiery explosions shut down a chemical plant near Houston last year, the company that owns the facility is cutting about 100 jobs and plans to temporarily stop production at the site.

The TPC Group Plant in Port Neches, Texas, will now be used as a transportation terminal and distribution center as it rebuilds the site from the devastating Nov. 27 explosion, according to company officials.

“As the company continues site response efforts, it has become clear that a potential rebuild of our Port Neches plant could take up to five years. Unfortunately, this timeline necessitates a reduction in our current workforce,” Houston-based TPC Group stated in a news release.

TPC Group said the layoffs will impact salaried, union and hourly workers. Around 100 employees in total learned Tuesday that their role will be eliminated, according to the TPC release.

No fatalities were reported in the explosion and fire at the 218-acre plant, but state and county officials ordered a mandatory evacuation for 50,000 people within a four-mile radius. The plant had as many as 183 employees prior to the accident, according to the TPC Group.