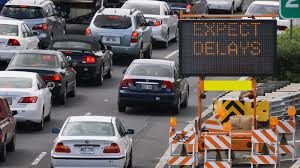 Bids will go out this month on a large state Transportation Department project to replace six Interstate 40 bridges that are considered deficient in Del City.

As The Oklahoman reported this week, it will mean at least three years of traffic headaches and construction for drivers.

Highway contractors are preparing to replace six structurally deficient I-40 bridges that have frustrated motorists for years because of the need to periodically close lanes for emergency maintenance and repairs, said Tim Gatz, executive director of the Oklahoma Transportation Department.

But traffic disruptions are expected to begin much sooner.

Starting late this month, road crews with T.J. Campbell Construction Co. will be working at night to resurface a section of I-40 that stretches from the I-35/Fort Smith Junction to Sooner Road.

By doing that resurfacing work first, transportation officials hope to prevent potholes or other pavement breakdowns from occurring later when bridge construction is underway. The $1.4 million resurfacing project will require workers to narrow I-40 to two lanes in each direction during off-peak driving hours.

There also may be some weekend lane closures, officials said. Once the resurfacing project is complete, transportation officials will turn their attention to replacing the six bridges and approaches on eastbound and westbound I-40 at Crutcho Creek, SE 15 Street and Sooner Road in Del City, officials said.

Those bridges have been patched so many times that “it looks like a quilt from the air,” said Terri Angier, state Transportation Department spokeswoman.

Gatz said replacing the bridges is critical because because they are on “an extremely vital corridor for Oklahoma and the nation that absolutely serves as direct access for Tinker Air Force Base and other businesses and communities along that route.”

The bridges being replaced are considered to be “the worst structurally deficient bridges remaining on the state system in the Oklahoma City metro area,” officials said.

The bridge replacement contract is scheduled to go out to bid in March and be awarded in April. Traffic is expected to be narrowed to two lanes in each direction throughout much of the 2 1/2 -year construction time.