Wyoming’s governor vows to protect oil and gas and coal 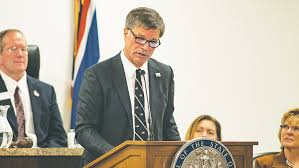 In his recent State of the State address, Gov. Gordon told legislators the state has enough savings to take time about future spending cuts as revenue declines from fossil fuels.

Yet Gordon promised not to dither amid what he described as efforts by other states to boost renewable energy sources at the expense of the coal, oil and natural gas industries.

Wyoming produces energy more safely and with more concern for the environment than anywhere else in the world, said Gordon, a Republican.

“And yet our industries are still discriminated against, maligned and decried as dead. Well, not on my watch,” Gordon said to applause and cheers from a joint session of the overwhelmingly Republican Wyoming Legislature.

The address by the first-term Republican kicked off a month-long legislative session dedicated primarily to the state’s next two-year budget cycle, which begins July 1.

Budgeting has been tight for several years now amid a decade-long downturn in revenue from the state’s once-booming natural gas industry and declining demand for coal to generate electricity, a result of low natural gas prices.

Last year was especially tough for coal. Two of the biggest coal mines in the U.S., Eagle Butte and Belle Ayr, shut down for over three months while its owner, Milton, West Virginia-based Blackjewel, went through bankruptcy and sold them.

Combined with weak prices for natural gas — by some measures the lowest in over 20 years — a more than 40% decline in coal production in recent years has left Wyoming in difficult shape, Wyoming House Speaker Steve Harshman, a Republican from Casper, said in a news conference.

Now, Wyoming’s savings during a decade or so of boom times starting in the late 1990s gives lawmakers room to continue to reduce spending, Harshman said.

“We’re trying to use every tool we can,” said Harshman.

Democratic lawmakers want to at least consider raising taxes and implementing a state income tax to keep Wyoming students among the top-funded in the U.S. per pupil.

Other priorities of Gordon’s include planning to protect big-game migration routes, improving water-supply systems like one in Goshen County that experienced a costly irrigation tunnel collapse in 2019, and suicide prevention.

Yet defense of fossil fuels was the predominant theme of his address.

In January, Wyoming and Montana asked the U.S. Supreme Court to rule on the state of Washington’s denial of an environmental permit for construction of a shipping terminal that would enable more overseas exports of Powder River Basin coal, Gordon noted.

“Know this: Wyoming will always advocate for our industries. whether it be to protect against unconstitutional restraints of trade, or in their endeavors for cleaner, more dependable and more affordable energy to our nation,” Gordon said.

Gordon also listed additional funding for promoting Wyoming’s coal industry, which supplies almost half of the nation’s coal for power plants, as a priority.

“Time is of the essence. We must act now if we are to stop coal mines from being closed,” Gordon said.