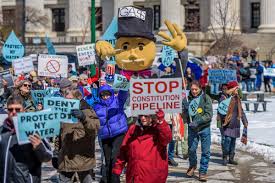 After years of fighting New York state officials as well as environmentalists, Tulsa-based Williams Cos. Inc is giving up on its proposed Constitution Pipeline.  And it’s left environmentalists elated.

The pipeline was an effort to transport natural gas from Pennsylvania’s shale fields to New York.

“Williams — with support from its partners, Duke Energy Corp., Cabot Oil & Gas Corp. and AltaGas Ltd. — has halted investment in the proposed Constitution project,” the company said in a statement Feb. 21.

“While Constitution did receive positive outcomes in recent court proceedings and permit applications, the underlying risk-adjusted return for this greenfield pipeline project has diminished in such a way that further development is no longer supported,” Williams added.

Williams made the decision even after the Federal Energy Regulatory Commission gave approval for the project last summer. FERC members were unanimous in their decision that the New York State Department of Environmental Conservation had waived its authority under Section 401 of the Clean Water Act. New York had earlier denied a permit to Williams in April 2016.

FERC initially turned down a request to review the denial from Williams, which argued the state took too long to act. The commission later agreed to revisit the topic after a D.C. appeals court decision that found states cannot extend a one-year deadline under the Clean Water Act by asking companies to withdraw and resubmit their Section 401 permit applications. New York used that practice when it considered the Constitution pipeline application.

Moneen Nasmith, a staff attorney at Earthjustice who led the environmental group’s work to stop the pipeline, cheered the decision in a statement following the report.

“Defeating the Constitution pipeline is an enormous victory for advocates who have been fighting for eight years to protect New York State and its waterways. At this critical moment for our climate, we cannot afford unnecessary fossil fuel projects that will lead to more fracking and exacerbate our climate crisis,” Nasmith said.