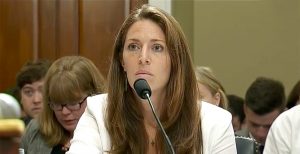 Oklahoma U.S. Sens. Jim Inhofe and James Lankford voted Tuesday in support of the confirmation of Katharine MacGregor to be deputy Interior secretary.

Her confirmation came on a 58-38 vote with five Democrats voting in support of her nomination by President Trump.

MacGregor also secured support from Florida Sen. Marco Rubio, who had placed and then lifted a hold on her nomination last year over concerns related to the administration’s offshore drilling plan.

“I am confident that Deputy Secretary MacGregor understands Florida’s unique and vulnerable coastal character, and that most Floridians are opposed to allowing offshore drilling off of the state’s coasts,” he said in a statement Tuesday.

A 2004 graduate of the University of Pennsylvania, MacGregor served 10 years as a congressional staffer before joining the Trump administration’s Interior Department in January 2017 and rising to her current position as deputy chief of staff.

She started her Interior climb as a special assistant to former Interior Secretary Ryan Zinke, later stepping up to be principal deputy assistant secretary for land and minerals management. She became deputy chief of staff in 2018.