Rig counts drop in Oklahoma and the U.S. 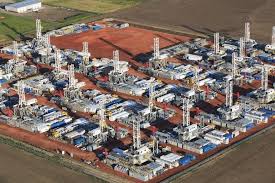 More oil and gas rigs are going into storage across the U.S. as a drop of one in the U.S. oil and gas rig count was reported in the past week while the number of active rigs in Oklahoma fell by three.

Baker Hughes Co. reported Oklahoma’s count dropped to 48 compared to the 115 active rigs a year ago. Nationally, the count dropped by one to 790 oil and gas rigs including a decline of one oil rig to 678 while the number of gas-drilling rigs remained at 110.

North Dakota stayed at 52 and Wyoming added two to reach 23 rigs. In Kansas, the Red Top Rig Report published by the Independent Oil and Gas Service showed a drop of five rigs to 17. a year ago, Kansas had 25 active rigs.

The rig count in the Granite Wash of western Oklahoma and the Texas Panhandle dropped by one to leave only one active drilling rig. The Mississippian in northern Oklahoma and southern Kansas was unchanged at two rigs.

The Permian Basin in West Texas and Southeast New Mexico reported an increase of two rigs to reach 411.

Oklahoma’s Ardmore Woodford dropped one to leave only four active rigs. The state’s Arkoma Woodford stayed at only one rig.

The D-J Basin in Colorado added a rig to reach 20. The Eagle Ford in South Texas dropped two to 68 rigs while the Williston in North Dakota stayed at 53 rigs.