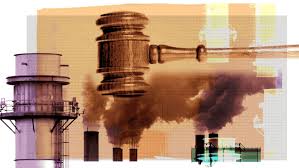 A bill to put restrictions on towns, cities and counties from suing oil and gas companies over climate change is making its way through the Kansas legislature and it has the backing of the Kansas Chamber of Commerce.

It would require local governments including school boards to get the state attorney general’s approval before hiring law firms on a contingency fee basis.

Such lawsuits are growing nationally as some cities, counties and states have gone to court, suing fossil fuel companies and blaming them for increased flooding, wildfires and even the rise of the sea.

“If a company, or industry has truly caused collective harm to residents of our state, the attorney general should be the lone voice in acting against those companies,” Eric Stafford of the Kansas Chamber of Commerce told a State House hearing last month. His organization backs the legislation.

It’s not a surprise because the U.S. Chamber of Commerce’s Institute for Legal Reform has supported fossil fuel companies hit with climate liability lawsuits. The national group believes such lawsuits undermine ““the state’s power, by displacing the role of the legislature in regulating activities, as well as the role of the attorney general in determining and representing the interests of the state’s residents in litigation.”

Some cities contract with outside law firms in suits against large corporations and use contingency fee contracts where the firms only get paid if they win their cases.

Some states have seen what is proposed in Kansas and are considering similar efforts. Florida is one of them where lawmakers who support the oil and gas industry have filed bills to limit the amount of contingency fees that can be collected by trial attorneys. 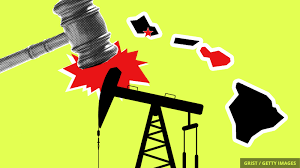 One city leader opposed to such restrictive bills is Rick Kriseman, mayor of St. Petersburg, Florida. He believes bills, like the one in Kansas would dump the bad behavior of corporations on taxpayers.

“For all of us that are impacted by climate change and sea level rise, the costs of mitigating our impact, but equally important, adapting to sea level rise and climate change, is going to be in the billions of dollars,” said Rick Kriseman, the mayor of St. Petersburg, Fla. “If you take that away from us, the ability to recover those resources, that means our taxpayers are going to be the ones who have to pay.”

The state of Louisiana has already put limitations on such litigation by state agencies. It was in 2013 when the Southeast Louisiana Flood Protection Authority-East filed suit against nearly 200 oil and gas companies and demanded payments to restore wetlands damaged by drilling, dredging and pipelines.

Bobby Jindal, governor at the time signed legislation that retroactively stopped the board from filing the lawsuit.

“When you have a multiple number of lawsuits and great numbers, like we’ve seen the opioid matter, literally in the thousands by the local governments in addition to the attorneys’ general, it makes it very difficult to reach resolution, to reach finality, to get settlements, to get these big companies to agree,” said former Florida attorney general Bill McCollum.

Now a partner in a global law firm, he told Florida legislators last month they should pass laws limiting the ability of local governments to hire trial attorneys for liability lawsuits. He urged them to also put limits on how much money local governments could collect from any awarded damages.

McCollum said that while U.S. Chamber’s Institute of Legal Reform has been his client for a number of years, his comments to the Florida House members represented only his own views as a former attorney general.

It is yet to be seen if the proposed Florida legislation will include such a mechanism, while the Kansas bill includes no such provision.

Kriseman, the St. Petersburg mayor, thinks such laws would make it even more difficult for local governments to hold corporations accountable for knowingly making problems like climate change worse.

“Unfortunately in Florida, we don’t really have an attorney general whose main focus is on protecting the residents and citizens of our state from bad actors,” Kriseman said. “The reason the suits have been brought is to try and not only recover the costs that we’ve spent to date, but to provide us with the resources to continue to deal with the impacts going forward,” and “also hopefully to help change the behavior of these corporations that are not acting in the best interests of the population.”

His political stance is supported by environmentalists like Marco Simons who is general counsel for EarthRights International. Simons says contingency fee agreements are better because they don’t waste taxpayer dollars.

“Corporations never like contingent-fee litigators because the reality is that such arrangements are the only way that many poor people and less-wealthy communities can marshal the resources necessary to challenge a major corporation,” said Simons, who represents three Colorado communities suing ExxonMobil and Suncor for climate damages.

“What they always fail to mention in their screeds against greedy trial lawyers is that the lawyers get nothing if they lose, and so they are only making money if they prove that the corporations are legally responsible.”