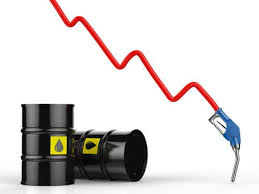 Gasoline prices keep sliding, not just in Oklahoma but across the nation where the average is now $2.43, a drop of 16 cents a gallon in the past year.

Oklahoma’s average price is $2.13, down five cents in the past week and 15 cents lower than a month ago. A year ago, the state’s average was $1.99 a gallon, according to AAA Oklahoma.

Prices at the pump in Tulsa average $2.03, a dime lower than a week ago while Oklahoma City’s average is $2.09, a decline of 4 cents a gallon.

Gasoline prices are lower, but at the same time they remain higher than one year ago.

“At $50/bbl (West Texas Intermediate), crude oil prices are at their cheapest point in a year,” said Jeanette Casselano, AAA spokesperson. “That, plus steady gasoline stock levels and low demand have helped to push the national average lower – a dime cheaper than three weeks ago.”