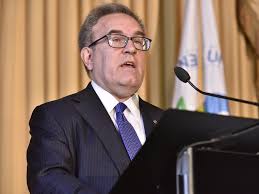 EPA Administrator Andrew Wheeler has reacted to last month’s Denver Federal Appeals court ruling that applied to a southern Oklahoma refinery that had received an exemption from the Renewable Fuel Standard.

Wheeler said over the weekend the ruling that stated the EPA exceeded its authority in exempting three oil refineries, one of which is in Oklahoma, from the Renewable Fuel Standard “has the potential of completely changing the small refinery program.”

Wheeler said in an AgWired interview EPA is “taking a close look at the 10th Circuit decision and the ramifications to the program,” and he promised, “We’ll have something on that shortly.”

The 10th Circuit Court of Appeals made the ruling in a lawsuit filed in 2018 by the Renewable Fuels Association, National Corn Growers Association, American Coalition for Ethanol and National Farmers Union. Their May 2018 lawsuit against the EPA challenged three specific waivers granted by the EPA including one to a refinery owned by Wynnewood Refining Co., which is a subsidiary of CVR Energy which is majority-owned by Carl Icahn.