Oh oh—snow’s back in the forecast for some Oklahomans! 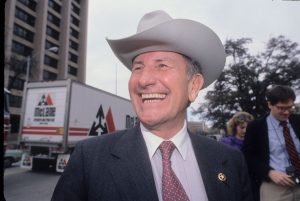 Clayton Williams, a Midland oilman, banker and entrepreneur who spent millions of his own money on a wild 1990 race for governor, has died. He was 88 and reportedly died of complications of pneumonia.

Williams, a Republican, lost a nationally watched race for governor to Democrat Ann Richards in 1990, after besting three well-known Republicans in the primary. The Texas Tribune reported he did it with a barrage of television ads and a knack for colorful and sometimes off-putting quotes.

In a race pitting two of the most colorful and interesting characters of modern Texas politics, “Claytie” said he wanted to return Texas to “the way it used to be,” while Richards was touting “a New Texas.” One set of Williams ads promised to introduce youthful criminals to “the joy of busting rocks.”

He rolled past three well-known Republicans in the primary: Kent Hance, a former state and federal legislator and Texas Railroad Commissioner; former Secretary of State Jack Rains and Dallas attorney and businessman Tom Luce. And he was well-positioned to win the general election.

That effort was undone, in part, by Williams’ own miscues. In conversation with reporters at his ranch, he compared the bad weather to rape, saying the best strategy was to “relax and enjoy it.”

He refused to shake Richards’ hand at a gathering in Dallas, an act of rudeness that backfired on him. Responding to a poll result that showed Richards gaining on him, he said, “I hope she hasn’t gone back to drinking again.” And in the final days before the general election, he told a group of reporters that he hadn’t paid any taxes one year in the mid-1980s when the oil business was collapsing; Richards made that her closing argument, asking her supporters if they’d paid taxes when the multi-millionaire oilman had not.

Williams never ran for office again, but his campaign foreshadowed decades of Republican dominance in Texas politics. Only one Republican, Bill Clements of Dallas, had been elected governor since Reconstruction. And after George W. Bush beat Richards four years later, in 1994, only Republicans have been elected to that office.

Williams was also a well-known figure and leader in Texas Aggie circles, contributing over the years to Texas A&M University for buildings and other projects and ceaselessly promoting the school.