Teachers learn about oil and gas from OERB 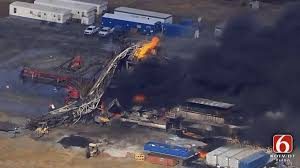 The civil trial stemming from the gas rig explosion and fire two years ago that killed 5 workers near Quinton,Oklahoma resumes this week in Pittsburg County District Court in McAlester.

The suit is against Houston-based National Oilwell Varco and the trial began last week. One of those who testified last week was NOV employee Dalton House, the supervisor for the company’s mud program used at the Patterson 219 rig.

He told the court the company was not responsible for the mud weights used in the well before the deadly January 2018 fire and explosion, according to the McAlester News-Capital.

House testified that the company was in charge of the mud program used at the well, but only supplied materials and recommended mud weights to be used by the well operator, Red Mountain Energy.

Attorneys for the families of Ray and Risk are seeking damages from NOV in the civil trial that is underway in McAlester. They said in opening statements that NOV is blame for the men’s deaths in the rig explosion and fire.

House was asked about earlier testimony  given by NOV’s senior director of Drilling Fluids, who said it was the on-site mud engineer’s job to monitor mud conditions. House disagreed with the statement, saying it was not the mud engineer’s responsibility.

When asked about a report that shows the mud weight was below NOV’s recommendation post-explosion, House asked where the mud that was tested came from, due to numerous potential things that could happen to the mud due to the fire.

House was later told during questioning by NOV’s lawyers that the sample did not come from the well.

Before questioning got any further, NOV defense attorneys asked House if he has anything to say to the family members, who were present in the courtroom, of the men killed.

“I pray for you and your families,” House said. “I really do feel sorry for you guys.”

After the emotional response from House, the defense questioned House on how the mud system worked at the rig and a video was played of the process with House answering questions on each step of the process.

House also was questioned about the hierarchy of the Patterson 219 rig, from the floor hands to the well operator, with the ultimate decisions coming from Red Mountain.

“Red Mountain has the ultimate decision when it comes to well decisions,” House said.