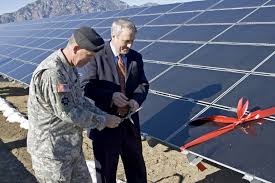 A ribbon-cutting ceremony has been held to commemorate the completion of the Army’s largest solar array located at Fort Carson, Colorado.

“We’re excited today to be part of such a landmark renewable energy project for Colorado and the United States Army,” said Smith. “It’s quite a distinction to host the Army’s largest solar array. Our vision for Fort Carson is to be a sustainable installation, and it is energy projects like this and our commitment to other projects that propel us along that journey. Our long-term energy goal is to sustain all facility mobility systems from renewable sources by 2027. We’re on our way. We look forward to continuing our work with our many partners and energy stakeholders that help the Mountain Post, the U.S. Army and the Pikes Peak region become more energy efficient.” 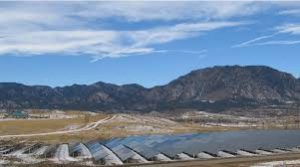 Graham thanked Ritter for his vision for renewable energy and expressed his thoughts on being a good neighbor within the Colorado Springs Community.

Construction of the ground-mounted solar photovoltaic array was completed in December. It was built on 12 acres of landfill and it is estimated that this 2-megawatt system will annually produce enough power for 540 Fort Carson homes. The project began in August 2006 after Xcel Energy accepted a proposal for harnessing solar energy on post. 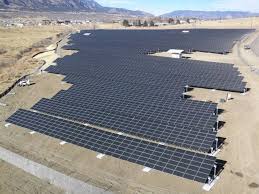 Rothenberg coordinated the creation of Carson Solar 1, LLC, a civilian contractor leasing the land at no cost from Fort Carson, and developed this project in association with Fort Carson and several other civilian contractors, including SunTechnics, Western Area Power Administration, Xcel Energy and Morgan Stanley.

“This is an example of what happens when government, business and the Armed Forces work in cooperation together in order to serve a mandate given to them by the people,” said Rothenberg. “Your success is all of our triumph; triumph for Fort Carson, triumph for the state of Colorado and beyond that, the entire United States and hopefully the rest of the world. We believe that this helps to service Governor Ritter’s vision of a new energy economy, energy security, environmental security and economic security, now and for the next 30 years to come.”

In 2004, Colorado voters became the first in the nation to approve a statewide requirement for renewable energy by passing Amendment 37. This amendment set standards for the state’s utility companies to acquire 3 percent of electricity from renewable sources by 2007, 6 percent by 2011 and 10 percent by 2015. After Ritter took office in 2007, he passed legislation that increased those requirements to 20 percent by 2020.

Ritter mentioned that Fort Carson won the Governor’s Renewable Energy Award for 2007 for its efforts in this project.

“We wanted to acknowledge the work at Fort Carson as visionary work,” said Ritter. “I think this is such a fantastic project for Fort Carson because this is something the people of this state certainly understand. We really believe that the future of this country will look differently in terms of the way we produce and how we consume energy than it did this year or five or 10 years ago. We believe that we’re going to live in a country 25 or 30 or 40 years from now where we will be consuming far more renewable (energy). This is about a partnership among the military, state government, the private sector and the utilities as well. One of the significant ways we can make a difference is by thinking of ways that we as a nation are energy secure and to have a United States military institution like Fort Carson say, ‘We’re going to be the first and we’re going to be the biggest’ is heartening for me as the governor of this fine state.”

The Fort Carson effort was managed by Stephanie Carter and Vince Guthrie. Carter’s role as the Directorate of Public Works utilities program manager was to prepare the landfill for construction. Guthrie, an industrial engineer with the DPW operations and maintenance division, coordinated the efforts of all the organizations involved.

Carter said the landfill, containing mostly construction debris, is one of the sites covered under Fort Carson’s hazardous waste permit and it’s regulated by Colorado’s public health department. Per state regulations, the waste had to be kept in place and couldn’t be touched by the new construction, so a two-foot “cover” of dirt borrowed from nearby construction sites was placed on top of the landfill. Special footers had to be designed to fit within the cover and provide enough stability to support the solar panels.

“Based on all of our sustainability efforts, this project tells you we’re putting our money where our mouth is and we’re taking a step in the right direction,” said Carter. “From my standpoint within the environmental arena, it really shows an ingenuity in reusing land. Land is at a premium right now with all the construction going on, so if you can get a site you can’t use for anything else and you do something like this with that land; it’s a win-win like the general was saying.”

Guthrie explained that Xcel is purchasing the renewable energy credits from the project to meet the state’s 20-percent requirement for renewable energy while Fort Carson is purchasing the electricity produced from the array at a fixed rate of 5.5 cents per kilowatt hour for the duration of a 17-year contract. If the array is producing 50 percent of its maximum output or 1,000 kilowatt hours, it costs Fort Carson $55 per hour for the power. The no-cost lease of the land to Carson Solar I keeps the cost of electricity down.

The solar panels have a 25-year warranty but are expected to produce power for 40 years and save $500,000 in electricity costs over the life of the contract.

“That isn’t a huge savings, but I think it’s great that we can figure out a way to make the numbers work and do something good to improve the sustainability of our energy resources,” said Guthrie.

Guthrie feels that the success of this project is based on the ability to repeat it at other places where renewable energy incentives are in place. He said the Fort Carson model is being used to construct a similar array at the National Renewable Energy Lab in Golden.

“We’ve gone from being ‘wackos’ to realists,” said Guthrie. “You’ve had wild ideas before to make something like this happen. When it’s a wild idea, you’re a wacko but when it happens, you’re a realist.”

Guthrie believes the efforts of this project will spur other renewable energy programs, such as a solar array for the Army National Guard on post. He is working with the governor’s energy office to determine what partnerships can be developed and he’s hopeful that an ongoing wind-resource assessment on Fort Carson will provide the go ahead for the installation of wind turbines.

“Before we can change the climate, we have to change the culture,” said Guthrie. “That’s what these projects are all about. You have to get over the mindset that it’s all about dollars and cents. My hope is that it breeds other projects.”