Former Phillips 66 executive joins board of Plains All American

Two Oklahoma oil and gas industry leaders were on hand at the White House Wednesday as President Donald Trump signed the first stage of a U.S.-China agreement,one that signifies a truce in the long-running trade war between Washington and Beijing.

During remarks, the President called it a “great deal for both countries” and pointed out both Hamm and Nichols and thanked them for their support.

“He puts a straw into the ground and oil pours out,” said the President as he introduced Hamm. “It’s true. Other guys spend billions and billions of dollars; they can’t find oil. This guy takes a straw, he goes like this, and oil pops up. Harold, my friend. He’s been with me from the beginning. Right Harold? He was with me from the day I came down the escalator with our First Lady.”

“Thank you Larry. Great job. These are great people.”

The President was joined by dozens of significant business leaders from around the country, as well as Chinese Vice Premier Liu He. The signing took place in the ornate East Room of the White House. 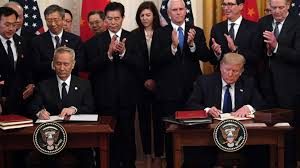 The preliminary pact boosts Chinese purchases of U.S. agricultural, manufacturing and other goods, and includes enforcement mechanisms. China has pledged to increase its purchases of U.S. goods and services by $200 billion over two years.

Though the deal cuts U.S. tariffs to 7.5% on around $120 billion in Chinese products, it keeps in place levies on some $360 billion of Chinese imports. White House economic adviser Larry Kudlow told CNBC the U.S. will take “proportionate actions” if China doesn’t live up to its commitments, and defended Trump’s use of import duties to spur Beijing to negotiate.