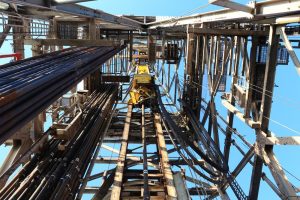 The two wells are located in the SCOOP at 31 7N 6W or about 3 miles east of Chickasha. The largest was the Kathryn 2-3-6XHS with production of 1,169 barrels of oil a day and 1,583 Mcf of natural gas according to its completion report. It had a January 2019 spud date with completion made in July 2019 at a depth of 21,190 feet in the Springer formation.

The sister well, drilled at the same pad site was the Phelps 1-31-30-19xhs well, spudded in January 2019 and completed in September 2019. It had production of 378 barrels of oil a day and 1,038 Mcf of natural gas. It was a dramatically long horizontal well with a depth of 27,644 feet according to the well’s completion report.

Continental Resources also reported completion of a well in nearby Stephens County at 26 1N 4W or 6 miles northeast of Velma. The Leon 1-23-14xhm had production of 630 barrels of crude a day and 981 Mcf of natural gas at a depth of 17,650 feet in the Mississippian formation according to its completion report.

Recent reports also showed Citation Oil and Gas based in Houston, Texas worked some more than 80-year old vertical wells in Pontotoc County near the town of Stonewall. The company recompleted two wells that were drilled in 1935 and 1936 in an effort to boost production. Both were straight holes at depth of about 4,300 feet. Citation recompleted a nearby third well.