Camino is on the hunt for more oil around El Reno 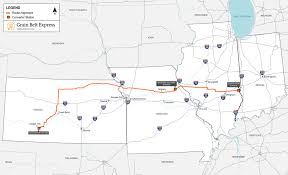 State Representatives in Missouri voted this week to stop the more than $2 billion Grain Belt Express power line from being constructed across the northern part of the state.

The House, in a 118-42 vote said “no” to a private company having the ability to use eminent domain to take land for the project that would transmit power from western Kansas wind towers to Illinois.

The Legislature’s bid to stop Chicago-based Invenergy from building the Grain Belt Express now moves to the Senate for further debate.

“The basis for this legislation is to stop any entity from having the power of eminent domain for the purpose of constructing an above-ground power line,” said Rep. Jim Hansen, R-Frankford, who sponsored the proposal.

Eminent domain is typically used by governments to take private property for public use. In this case, Invenergy said it needs the power in order to claim land it needs for the towers that will carry the above-ground line.

The legislation comes despite a December court ruling that backed up action by the Public Service Commission, which earlier endorsed the project in its role as a public utility monitor.

The $2.3 billion project, which aims to bring Kansas wind energy to Missouri, Illinois and Indiana, is expected to cross the property of 570 Missouri landowners, stretching across more than 200 miles and eight northern counties.

Municipal utilities, including Kirkwood, Columbia and Hannibal, have agreed to buy a portion of the 500 megawatts of power that would be made available in Missouri — a deal that helped persuade utility regulators that the project is in the public interest.

“There’s nothing more important to Missouri farmers than property rights. Today the House of Representatives spoke up for the people of rural Missouri to rein in the abuse of eminent domain,” Hurst said. “We encourage the Senate to take up this bill quickly and send it to Governor Parson’s desk.”

The legislation is House Bill 2033.