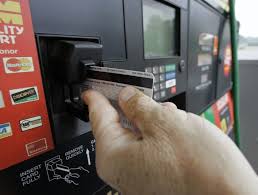 Gas stations in Arkansas are racing to update their pumps to accept credit and debit cards that have embedded microchips after Visa Inc. and Mastercard Inc. rejected a request to delay an Oct. 1 deadline to complete the work.

Fuel operators that have not upgraded their card readers by the deadline will be liable for any card fraud that happens at their businesses, according to the Arkansas Democrat-Gazette.

“It’s a huge ask,” said Joshua Smith, chief executive officer of Gas Pos, which sells point-of-sale systems. Most convenience stores are independently owned and operated and can’t afford to upgrade as soon as requested, he said, “but there are stores making the investments because they want their communities to feel safe.”

The retail industry began the shift to so-called EMV (Europay, Mastercard and Visa) chip card readers before 2015, when global payment networks set a deadline for merchants, with the exception of gas stations.

Since the shift, financial institutions are no longer liable for fraudulent transactions, merchants are. Because of the complicated infrastructure of retail gas pumps, and lack of available technology, Visa and others delayed the compliance deadline for gas stations to 2017, and again to October of this year.

With the date approaching, some fuel operators have anticipated another delay. However, Merchant Advisory Group, which advocates for merchants, has said another delay is unlikely.

After submitting a two-year delay request “to ensure readiness across the majority versus the minority of the market,” Laura Townsend, the Merchant Advisory Group’s senior vice president of operations, said in a blog post last month that both Visa and Mastercard responded and are committed to the October date with no plans for an extension.

“We believe extending chip technology to fuel pumps is an important step to take to protect businesses and consumers who want to pay securely as well as conveniently,” Visa spokeswoman Sandra Chu said in an email. “We’re encouraged that fuel merchants have been taking steps to adopt chip technology at automated fuel dispensers and making notable progress.”

Chip technology, while relatively new in the United States, has long been used around the world as a way to prevent card fraud. Since U.S. retailers started accepting chip cards in 2015, counterfeit fraud dollars have dropped 52% as of June 2019, according to Visa. More than 3.7 million locations use EMV card readers.

Meanwhile, counterfeit fraud is rising at gas pumps and expected to reach $450 million this year and as of June, a mere 13% of the pumps are fully chip-ready, according to the Merchant Advisory Group. Many don’t have plans to update their pumps at all.

“What does that mean to those undecided or consciously choosing not to deploy chip technology?” Townsend said. They will have to plan for chip migration and face hurdles, including finding the right hardware, software, technicians and chip certification, or run the risk of incremental fraud losses, she said. “The industry is clearly not prepared.”

Most station operators have card readers that meet EMV status inside the stores, but not outside at the pumps. According to a 2019 survey by Conexxus, a nonprofit that advocates for convenience stores and the petroleum market, the main hurdle they are facing stems from a lack of available software. Certification and financial issues are also in the mix.

Smith of Gas Pos, a North Little Rock company, said most of the gas stations in Arkansas are working toward implementation or already have chip readers at the pumps. Many have placed orders and as a result, fuel pump service companies are busy, he said.

El Dorado’s Murphy USA has chip readers inside all of its 1,479 stores and on most of its pumps, said Rob Green, the company’s director of fuels marketing.

“We fully intend to meet the EMV standard by the deadline,” he said. “The safety of our customers’ data is of the utmost importance to us. We value the relationship with our customers and invested $60 million in 2019 to help secure their data.”

Others don’t have chip readers at all at their pumps. According to the Conexxus survey, 70% of the respondents said that none of their locations had them and 9% said the rollout was complete at less than a quarter of their stores.

The main issue is money. If they don’t upgrade, the fees retailers will pay starting in October for fraudulent use of a card could drive some out of business, Townsend said in a blog post.

But the chip-card reader upgrades cost about $12,000 per fuel dispenser, Smith said, excluding service fees. The cost rises if the merchant has to obtain construction permits, he said. In short, merchants are facing an upgrade that costs as much “as a condo on the beach or a nice sports car.”