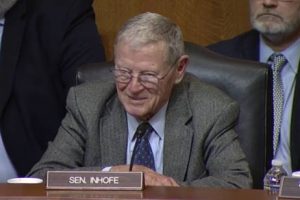 Oklahoma U.S. Sen. Jim Inhofe was told this week that the U.S. Commerce Department is close to a decision on Tulsa’s request for disaster funding for its Levee System and pumps.

The revelation came during a Senate Environment and Public Works committee hearing where Dr. John Fleming, Assistant Secretary of Commerce for the Economic Development of the U.S. Department of Commerce testified this week.

During the hearing, Sen. Inhofe questioned him about the status of any federal assistance following last year’s Arkansas flooding that stressed the Tulsa-West Tulsa Levee System to its limits.

“Let me say first of all, that since 2015, EDA’s priority when it comes to disaster relief has been to focus on resiliency and I think this project really points that out. So, we’re looking at the Tulsa County Drainage District 12 levee pump stations and an application has been made and coincidentally, Senator, the decision is being made, by the committee that makes this decision, today,” answered Dr. Fleming.

“But this was really bad. Our levee in Tulsa, we call it the “West-Tulsa Levee,” was built in the middle-40s. It’s well past its lifetime. When this flood came in we had people with fingers in the dike down there, literally. We were very fortunate that we didn’t have a major disaster,” explained Sen. Inhofe.

During the hearing, the Senator pointed out how Oklahoma’s navigation way was badly damaged in the flooding.

” Going through the Port of Muskogee, we had extensive damage done down there and that falls into the category of your disaster recovery grant. Let me first of all thank you and the Corps of Engineers for moving up the studies that are going to be necessary before we actually start fixing that dike,” he added.

Dr. Fleming explained Tulsa’s request for aid was considered by a committee in Austin, Texas.

” It would never make it that far if it wasn’t a really good application. I can’t get ahead of the decision of course, and in fact the decision is not mine, it does lie at the regional level,” he said.