Fewest oil and gas drilling permits in Colorado in a decade 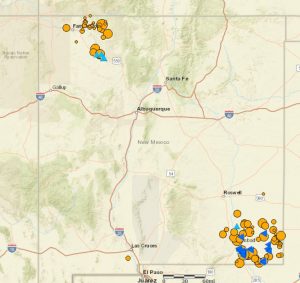 More possible methane emission violations in New Mexico’s oil and gas operations are being investigated by the state’s Environment Department.

Department investigators say they had received video footage collected by the public using forward-looking infrared or FLIR cameras to document the methane and other air contaminants, according to a report by the New Mexico Political Report.

Based on the video, NMED issued a statement saying it believes there are “potential violations of existing state permits or regulations.”

NMED is sending written notices to oil and gas operators about the emissions. Oil and gas producers will have 14 days to correct the issues. If those issues are not corrected within that time frame, NMED said it may launch an investigation or initiate civil enforcement of the violations, which could include assessing monetary penalties to producers who are in violation.

During two flyover compliance inspections in September and October 2019, officials identified and documented emissions leaks from flares, tanks and other types of oil and gas equipment. Officials found 111 of over 5,300 storage tanks were emitting methane and other pollutants, and 13 of the 530 flares observed were unlit and emitting methane.

NMED said the department is now reviewing that footage to determine if any violations had taken place.

“The Department is addressing oil and natural gas emissions through innovative compliance assurance measures today as we invest in methane regulations for tomorrow,” said NMED Cabinet Secretary James Kenney in a statement. “The emissions documented in many of these videos are unacceptable to this Department and pose significant health and safety risks to New Mexico communities and employees of these companies.”