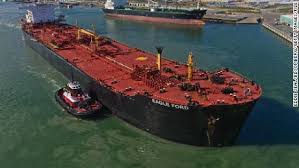 Pushed largely by oil production in the Permian Basin of West Texas and eastern New Mexico, the U.S. for the first time posted its first full month as a net exporter of crude and petroleum products.

It was the first such posting since government records began in 1949 as the U.S. exported 89,000 barrels a day more than it imported in September. The announcement was made by the U.S. Energy Information Administration.

Observers admit it was a milestone they wouldn’t have predicted ten years ago, but thanks to the onset of the shale boom, oil production has swelled in the U.S.

Heavy petroleum contributions from the shale boom have been made by the Oklahoma wells in the STACK and SCOOP as well as North Dakota’s Bakken and Colorado’s DJ Basin.

“The US return to being a net exporter serves to remind how the oil industry can deliver surprises — in this case, the shale oil revolution – that upend global oil prices, production, and trade flows,” said Bob McNally, a former energy adviser to President George W Bush and president of the consulting firm Rapidan Energy Group.