STACK yields 6,000 barrels of oil a day from 3 sister wells 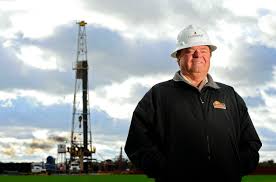 Harold Hamm received quite a gift as he stepped down as Chief Executive Officer and moved up to Executive Chairman of Continental Resources Inc., the company he founded 52 years ago.

The same week his firm made the announcement of a new CEO, the company filed completion reports on three STACK wells that had combined production of more than 6,000 barrels of oil a day.

The Reba Jo wells are located at 13 15N 11W in Blaine County or a pad site about 5 miles southeast of Watonga. One was actually drilled in 2017 but its completion report indicated the return to the site was “to finish drilling and completing well.” But two others were drilled on the same pad with combined production of 6,078 barrels of oil a day.

Continental also completed seven other wells in Grady County including four on a single pad.