Rig activity declines in Oklahoma and the U.S. 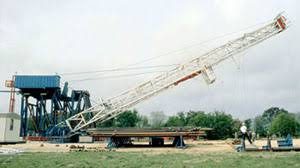 The number of oil and gas rigs drilling for new sources of energy dropped again in the past week, both in Oklahoma and across the U.S.

Oklahoma’s count slipped by one to 50 rigs compared to the 142 rigs active in the state last year at this time.

The U.S. count dropped by three to 799 and is 276 lower than the 1,075 rigs reported in early December 2018. The drop last week included five fewer oil rigs, leaving 663 actively drilling for oil. The number of gas rigs increased b y two to reach 133.

Oklahoma’s count of 50 compares to Texas where the number of rigs declined by 5 to 400, way below the 529 rigs reported a year ago.

Colorado’s count remained at 23. Louisiana dropped one to 56 rigs while New Mexico stayed at 103 active rigs. North Dakota’s count increased by one to 50. Wyoming remained at 29 rigs.

The Red Top Rig Report published by the Independent Oil and Gas Service in Wichita, Kansas showed the Kansas rig count went down by three to 29. A year ago, there were 45 active oil and gas rigs in Kansas.

The Mississippi in northern Oklahoma and Southern Kansas has only two rigs. The Granite Wash has one rig while the Permian Basin reports 400 active rigs, a decline of five. The D-J Basin in Colorado remained at 21 and the Eagle Ford in South Texas stayed at 60. The Williston in North Dakota added a rig to make 52  drilling in the state.