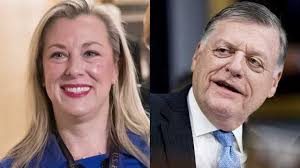 Oklahoma’s delegation in the U.S. House split its votes this week in a vote on the Tribal Coastal Resiliency Act, a measured aimed at boosting the resiliency of the nation’s coasts and Great Lakes to the impacts of climate change.

The measure passed on a 262-151 vote with Republican Rep. Tom Cole and Democrat Rep. Kendra Horn voting for the bill.

The legislation includes 10 separate bills passed by the Natural Resources Committee, some of which were bipartisan.

H.R. 729 would amend the Coastal Zone Management Act of 1972 and would authorize the appropriation of $5 million a year for the National Oceanic and Atmospheric Administration (NOAA) to provide grants to Indian tribes to restore or preserve areas with ecological, cultural, historic, sacred, or esthetic significance and to stabilize coastal shorelines.

Both Reps. Cole and Mullin are members of Native American tribes in Oklahoma.

The Congressional Budget Office estimated that implementing the bill would cost $22 million over the 2020-2024 period and $5 million a year thereafter, assuming appropriation of the authorized amounts. In 2019, NOAA allocated about $75 million for all coastal zone management grants.