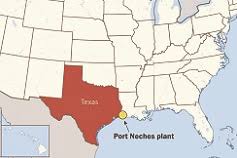 Officials monitoring the burning fires at a chemical plant in Port Neches, Texas say they have found no indication of asbestos in the air.  The all-clear has been given and nearby residents were allowed to return to their homes over the weekend.

But late Saturday, another distillation tower at the TPC Group facility toppled and continued to burn following the initial explosions on Wednesday.

Some of the homes suffered damage by the force of the blast and on Sunday, insurance adjusters were assessing the damage.

The plant, which has been cited for environmental violations in the past, experienced two explosions that forced a mandatory evacuation for 50,000, while sparking fears of asbestos contamination.

Officials noted that some of the equipment that had exploded from the TPC Group chemical plant site contained asbestos insulation, adding that toxicology consulting firm CTEH will be leading lead removal efforts.

“Specialists will be assessing homes and yards within approximately one-half mile of the TPC Port Neches Operations fence line,” TPC Group said in an update. “Please be aware that the cleanup specialists are required to wear protective clothing to remove debris beyond the fence line. We expect assessments and clean up to begin immediately.”

Three plant workers were injured in the blasts, including two TPC employees and a contractor, who have since been treated and released from hospitals in Port Arthur and Houston, said Troy Monk, TPC’s director of health, safety and security.

Around 30 employees were present at the plant at the time of the explosion, with all workers accounted for, according to TPC.