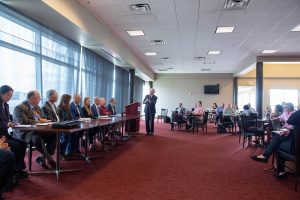 A newly-named Producer Water Research Consortium has wrapped up its public meetings and will begin research into the treatment and reuse of produced water in New Mexico.

The consortium is a public-private partnership with New Mexico State University and held five meetings across the state, wrapping up last week.

Mike Hightower, civil and environmental engineering research professor at the University of New Mexico and program director of the consortium said identifying the fracking fluid chemicals in the produced water is a chief objective, according to the New Mexico Political Report.

“Our plan is to have our first general membership meeting to kick off our technical activities and research activities in the first couple of weeks in January,” he said. “This is kind of run like a National Science Foundation activity. We’ve got the best researchers we can find in the state of New Mexico and nearby states, we’re going to use the best equipment that exists in the universities and the national labs, and we’re going to make that information available to the public to look at.”

“We’re going to be transparent and make sure all the information gets out to everyone. We’re not hiding anything,” he said.

Click here to report the story from the New Mexico Political Report.