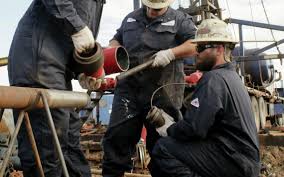 Most counties in Oklahoma showed an increased unemployment rate in October from September according to an announcement by the Oklahoma Employment Security Commission. New figures show the oil and gas sector continued to lose workers.

Unemployment rates were higher than a year earlier in 57 counties, lower in 14 counties and unchanged in six counties.

The county rates followed the historical patterns of lowest in the Panhandle and highest in the southeast part of Oklahoma. The lowest county unemployment rate of 1.6 percent was recorded in Beaver and Cimarron Counties. The highest county jobless rate was 7.3 percent in Latimer County and 5.9 percent in Haskell county.

Tulsa didn’t experience as great a loss in oil and gas employment, reporting  7,300 employed in October, the same amount as in September. But it suffered a loss of 200 jobs compared to October 2018 or 2.8 percent.

Checking some of the counties where there is continued oil and gas exploration, the unemployment rates remain low—1.8 percent in Blaine County and Kingfisher County which are two of the main counties comprising the STACK. Canadian County, the other main county in the STACK has a jobless rate of 2.9 percent.