More than 50 percent of the initial 100-mile route from Pecos County, Texas east has been finished. Kinder Morgan is building the line along with EagleClaw Midstream and Altus Midstream Processing. It is designed to carry up to 2.1 billion cubic feet of natural gas from the Waha Hub in West Texas to the Gulf Coast.

The construction reported this month is one of five phases of construction to complete the massive gas line. Workers are digging a 9-foot trench and burying the pipeline. Eventually, simultaneous construction of the other phases of the line will allow the line to be operational in early 2021. 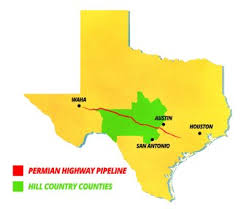 A spokesman for Kinder Morgan recently explained that early construction is also underway on compressor stations.

The company also indicated that 99 percent of the land acquisition for the remainder of the pipeline has been completed. Final permits are expected to be obtained in early 2020.

But the line still faces opposition in the Hill Country, especially from residents in Hays, Gillespie, Blanco and Caldwell counties.