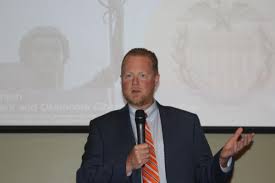 With a slight uptick in unemployment and a growing drop in oil and gas employment in Oklahoma, a question is being asked—Is Oklahoma’s economy still growing?

The answer given by Chad Wilkerson, Vice President and Executive of the Oklahoma City branch of the Federal Reserve Bank is mixed. He spoke recently at an Oklahoma State Senate retreat held in Stillwater and indicated Oklahoma’s economy slowed in 2019, thanks largely to lower oil and gas prices.

He offered several other observations on how energy plays such a critical role in Oklahoma’s economy:

As Wilkerson explained to the state senators, the pace of Oklahoma job growth has slowed steadily in 2019 and is now up only slightly from a year ago. The weekly initial claims for unemployment insurance have also been running at nearly 2015-16 levels in 2019.

The impact of the low oil and gas prices worldwide has resulted in state sales tax receipts below year-ago levels. But Wilkerson said sales in the two large cities, Oklahoma City and Tulsa have picked up slightly.

He also observed that unemployment in Oklahoma is low because more people have been exiting the state than the number of those arriving in the state. Further, highly educated Oklahomans in most age groups are leaving the state and many are headed to Texas.

Wilkerson says one consequence is that educational attainment is growing less. He said the silver lining is that people keep coming to Oklahoma–just more have left.

The Fed official said a longer-term trend worth watching is Oklahoma’s switch in net domestic migration flows in recent years as more highly educated Oklahomans leave the state. But he also indicated some industries in Oklahoma have continued to thrive and many pay good wages.