Lowest and highest weather marks of 2019 in Oklahoma 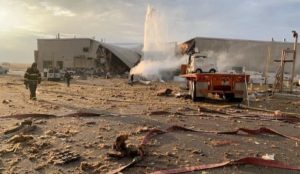 Two of the 15 people injured in a Friday explosion at Textron Aviation in Wichita remain hospitalized.  Both are listed in serious condition.

Sedgwick County fire investigators blamed a rupture of a three-inch liquid nitrogen line on the explosion in a building that houses composite manufacturing and experimental aircraft fabrication. The nitrogen is used in the processing of some products.

Robert Baker was among those inside the building who wasn’t seriously injured in the blast. He says he initially thought he felt an earthquake and looked around, thinking there could possibly be construction happening on the roof, according to a report by KWCH TV news

“By the time I got oriented, there was a pressure wave. the walls were flexing,” Baker says. “There was dirt permeating through the cracks on the walls. There wasn’t any debris flying around that I could see, but by that point, you had to know it wasn’t any construction. It wasn’t somebody banging on the walls. It was an explosion. There was no other way to describe it.”

Baker says most of the buildings lights went out except for a small area where he was. He was able to see what was going on and says he doesn’t think he’s “ever been more scared.”

“I’m not easily shaken or rattled by any means, but it was pretty startling when you hear that level of intensity,” Baker says. “I saw darkness. I saw dirt in the air. I saw everything moving around because there was a pretty big explosion and the walls were flexing. The wall I was standing next to moved four feet.”