Dry week in Oklahoma has firefighters on alert for wildfires 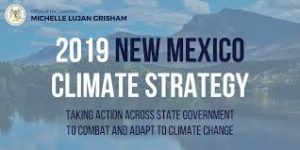 Governors of New Mexico and Colorado are seen as among new Democratic state leaders who are pushing for more green climate efforts.

Their efforts have caught the attention of supportive environmentalists who claimed New Mexico had seen no clean energy movements over the previous 8 years of Republican administrations.

New Mexico Gov. Michelle Lujan Grisham, D, campaigned heavily on a clean energy platform, even climbing a wind turbine in one of her campaign advertisements.