More rigs going up in Oklahoma 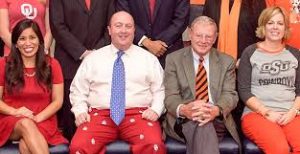 Oklahoman Ryan Jackson, now the chief of staff at the U.S. Environmental Protection Agency has dodged one bullet from the EPA’s internal watchdog.  But he could face another after he refused to reveal where he obtained a scientist’s congressional testimony.

Jackson, who spent nearly 15 years with U.S. Sen. Jim Inhofe took over as chief of staff in the early days of the Trump administration and managed to survive as EPA administrator Scott Pruitt resigned.

But the Office of Inspector General warned in a report this week that if Jackson’s refusal to cooperate with a probe becomes standard for future oversight, EPA leadership will “convert the IG Act into a no man’s land whereby agency staff—under the borderless banner of ‘constitutional concerns’ may create wholesale exemptions from providing information to the OIG,” according to POLITICO’s Morning Energy Report.

In a statement, EPA dismissed the acting IG’s findings as overwrought and said the OIG’s actions threaten the relationship between EPA and its watchdog.

The Morning Energy Report indicated it is not clear whether this is the end of the matter. Assistant Inspector General for Audit and Evaluation Kevin Christensen told ME he has fielded questions about the audit from committees on both sides of the Capitol, though he declined to specify which ones. Christensen also said he’s game to meet with Jackson in his role as chief of staff for future unrelated audits on other EPA business if necessary, though he said that need hasn’t arisen since this fight exploded into public. “We did what we had to and we move forward,” Christensen said.

The OIG confirmed to ME that a separate investigation into Jackson remains ongoing but declined to confirm the topic. POLITICO reported last month that investigators are looking into allegations of document destruction against Jackson. EPA has denied any such wrongdoing. It remains unclear how long that investigation might take.

Jackson has not yet agreed to an interview with the inspector general’s office, which is investigating numerous allegations against the chief of staff, including that he attempted to pressure an independent scientist to change her testimony to Congress and that he oversaw destruction of documents related to probes of Pruitt’s travel and other matters.

EPA has defended Jackson and accused the inspector general’s office of overstepping its authority. The agency declined to make Jackson available for an interview.

The episode represents the latest run-in between the Trump administration’s political appointees and the inspectors general who are meant to serve as a check on waste, fraud and abuse. And it shows that the EPA is still dealing with the aftereffects of Pruitt’s tenure, nearly 18 months after he stepped down amid a series of investigations into his dealings with lobbyists and his personal use of agency resources.

It also illustrates that Jackson doesn’t necessarily care about being seen as playing nice with the IG’s office, said one former top EPA official who requested anonymity to speak candidly.