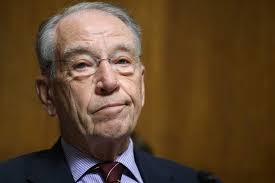 The White House has asked Iowa Senator Chuck Grassley’s office for input on the administration’s latest proposal to boost the ethanol market in 2020, according to two sources familiar with the matter on Friday, after a flurry of conversations between President Donald Trump and corn-state advocates critical of the plan.

The White House request shows the Trump administration may be having second thoughts about the proposal, which the president had hoped would shore up his support in the Farm Belt, a crucial political constituency in his reelection bid, the sources told Reuters News.

The Environmental Protection Agency is already due to miss a Nov. 30 deadline to finalize the proposal, which was drafted after prolonged negotiations.

At issue is a plan outlined by Trump’s EPA in October that was intended to ensure the administration’s expanded use of waivers freeing refineries from their obligation to blend ethanol into gasoline does not hurt farmers by cutting into U.S. demand for the corn-based fuel.

Under the U.S. Renewable Fuel Standard, refineries are required to blend 15 billion gallons of ethanol annually, but the EPA can exempt small facilities that demonstrate compliance would hurt them financially. The EPA has roughly quadrupled the number of waivers it has issued since Trump took office.